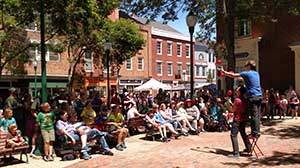 ©Gardiner Main StreetGardiner is historic city full of culture and architecture. Established as Gardinerston in 1754 and officially incorporated in 1803 as Gardiner, the city sits along the Kennebec River at the head of navigation.

The city was once a thriving manufacturing center with multiple paper mills, shoe manufacturers, and logging and saw mills. In the 19th and early 20th century, Gardiner was at the center of the booming ice industry.

Gardiner Board of Trade
www.gardinerboardoftrade.org