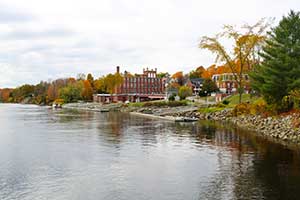 Downtown Richmond ©Caroline SabanSettled in 1725 and incorporated in 1823, Richmond is a charming community made up of beautiful farms, Victorian and Greek Revival homes, and a growing vibrant village. The town sits on the banks of the Kennebec River with Swan Island, an abandoned 18th and 19th century town called Perkins Township, a stone’s throw away.

Richmond’s waterfront offers moorings and docking services such as gas, power and pump- out, along with easy access to the North along the Kennebec River up to Augusta or to the South headed towards Bath and the open Atlantic Ocean.

Whether you arrive to Richmond by car or boat, downtown Richmond offers many shops and restaurants to explore. Stroll up the hill for an ice cream, shop in a unique art gallery, or grab a bite at a local restaurant.