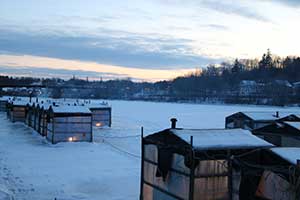 Ice Fishing on Kennebec River ©Caroline SabanRandolph, about 2 square miles in size, is about 6 miles south of Augusta. It has a small town atmosphere with the proximity to all services and schools. The town lies along the bank of the Kennebec River just across from the City of Gardiner.

Randolph was incorporated as West Pittston in 1887 and was a thriving river community specializing in boats, lumber, and ice.