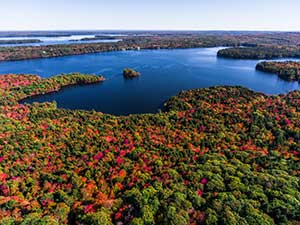 The sixty square miles of the town are largely composed of lakes, streams, and wetlands. Boaters will find plenty of water surface to cruise on from morning to night. For those who enjoy fishing, Belgrade’s bodies of water offer several species of fish, including landlocked salmon, brook trout, and largemouth and smallmouth bass.

Nature lovers will also be delighted by the opportunities to bird watch and spot the many species that call Maine home.

In the summer months, the idyllic town’s population nearly doubles when part-year residents return to their cottages and seasonal camps along the many scenic lakes and streams.