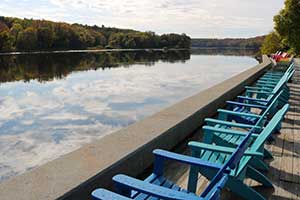 Granite City Park ©Caroline SabanHallowell lies south of Augusta and rests on the banks of the Kennebec River. The city is classified as a National Historic District and is known for its culture and architecture.

Settled in approximately 1762, Hallowell was once a granite and lumbering community. Today, it is nicknamed the “New Orleans on the Kennebec,” for its charm of yesteryear, the flavor of old world simplicity, and the warmth of old- fashioned hospitality.

Hallowell features many unique and delightful shops in the downtown business district. Hallowell is also home to renowned art galleries and local artists, performing arts theaters, and festivals. Downtown Hallowell is teeming with bars, taverns, and restaurants that are often full of locals and tourists alike. In the north end of the city, Granite Park is a popular spot in the warmer months to grab a seat in one of adirondack chairs that line the Kennebec River and watch the river flow by.

Hallowell Area Board of Trade
www.hallowell.org