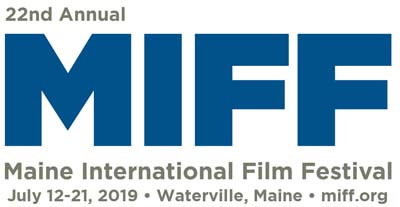 Waterville, Maine —The Maine Film Center, whose mission is to educate, entertain, and build community through film and art, is pleased to announce the 22nd Annual Maine International Film Festival (MIFF), scheduled for July 12th – 21st, 2019 in Waterville, Maine. MIFF is currently seeking film submissions as well as sponsoring organizations and individuals, Festival Pass preorders, and volunteers for the 10-day Festival. Learn more at: http://www.MIFF.org.

Over the course of 10 exciting days, MIFF showcases 100 premier releases of American independent and international cinema, classic revivals, inspiring performances, exhibitions, and community workshops in Waterville, Maine. At MIFF, audiences have the unique opportunity to connect with directors, producers, writers, actors, and musicians who travel to Waterville from across the globe. Founded in 1998, MIFF honors members of the independent film industry whose contributions to cinema deserve recognition. Honored guests and visiting filmmakers host panels and informal Q&A sessions, giving the audiences an incredible chance to hear about the art of film from those on the front lines.

MIFF is currently seeking submissions – the absolute deadline is May 20th – and primarily seeks feature-length and short films of any genre. Special consideration will be given to works that were filmed in Maine or that have a significant Maine theme or focus. MIFF will not accept films that have been theatrically released prior to the start of the festival or have been publicly exhibited in the state of Maine in any way (including film festivals, television transmissions, and one-off events). Filmmakers are encouraged to submit at https://www.miff.org/submit/

There are many ways to support this exciting, high-profile highlight of summer in Maine. Pass holders receive access, perks, exposure, placement, recognition, and exclusivity. Package holders and supporters are prominently credited in MIFF’s programs, events, and print materials. MIFF is also seeking business sponsorships for its film screenings and special events including the Opening Night party and Achievement Award galas. Want to get involved behind the scenes and in the front lines of the Festival action? Volunteer! Volunteers receive many perks and exclusives in return for their service to the arts,

including free film access, VIP event access, celebrity meet and greets and more. Learn more about these exciting opportunities to make the most of MIFF at http://www.MIFF.org today!

About the Maine International Film Festival
The 22nd annual Maine International Film Festival, a project of the Maine Film Center, will be held in Waterville, Maine from July 12-21 at Railroad Square Cinema and the Waterville Opera House. During the 10 days of the festival, MIFF features nearly 100 films, representing the best of American and International independent cinema and spotlighting some of Maine and New England’s most innovative filmmakers. The full MIFF schedule will be available on the Festival’s website, www.miff.org as the Festival nears.

About the Maine Film Center

The Maine Film Center (MFC) brings independent film to Waterville through the nationally recognized Maine International Film Festival, an annual 10-day event that attracts filmmakers and film aficionados worldwide; Railroad Square Cinema, the only Sundance Art House cinema in Maine; and by hosting world-class exhibitions and educational opportunities. MFC inspires an appreciation for the art of film, and, as part of the artistic community, works to make Waterville a sought-after arts destination. MFC firmly believes that art and culture have the power to enrich lives, strengthen community bonds, and act as an economic engine. Its mission is to educate, entertain, and build community through film and art.