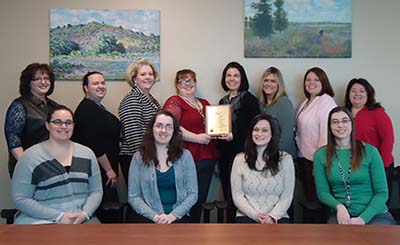 “This recognition is not simply a pat on the back for our Credit Union staff, who work tirelessly on fundraisers year ‘round.  This is a direct reflection of the kindness, generosity and compassion of our members and our community.”  Gardiner and the surrounding communities have a lot of heart.  When called upon to help their neighbors in need, they always step up, dig deep and do all they can.  “We are so proud to be part of such a generous community and to be able to help end hunger in our area”, stated Kelly Marie, GFCU’s Marketing Specialist.

Gardiner FCU raised a total of $17,290.84 for Ending Hunger, in 2015.  With the first place in highest per member contributions and ranking 9th place in total funds raised, among the 62 participating Credit Unions, they earned an additional $2,250 from funds raised by the Maine Credit Union League.  That means Gardiner FCU has a total of $19,540.84, in Ending Hunger funds, to distribute to area food banks and organizations that feed the hungry in Gardiner and surrounding communities.

Six weeks into 2016, the staff at Gardiner FCU continues their commitment to Ending Hunger.  Their annual Chili & Chowder day, which was February 11th , raised over $500 .  Throughout the month of February, they sold over 650 “Hearts for Ending Hunger”, at $1 each and displaying them throughout the lobby.  “We will continue to work toward ending hunger, as long as there is a need.”